You have to start somewhere….. 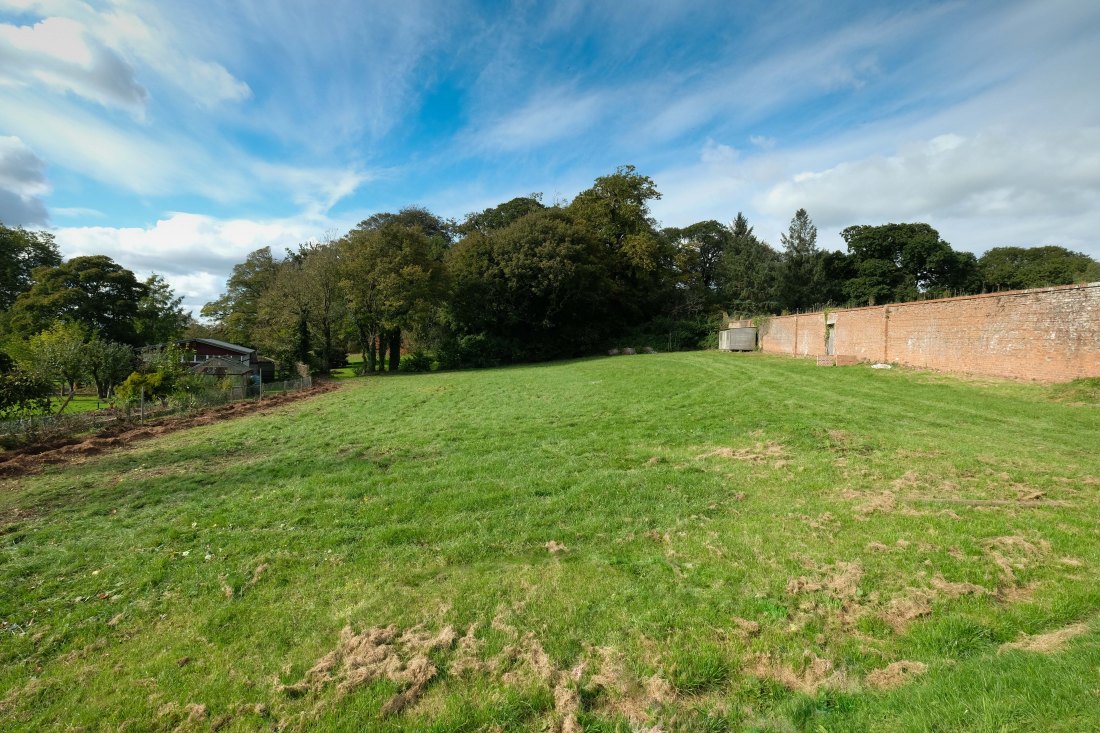 The house plot is as seen above, but  a strip of land beyond the wall has been added and will become a ‘hidden garden’. The plot is dominated by the 18th century wall of what was originally the kitchen garden of a typical Georgian estate. The planning process started early in 2015 and it was finally approved early in 2016 under the “Paragraph 55” exception (see here for an interesting explanation of that). It is being built using Passive House principles, with the goal of being a certified Passive House (see here for more information). Construction began in October 2017.

Follow the construction in photos from the start here (latest are here).

The architects are McLean Quinlan.

The builders are Goulden & Sons.

The very contemporary build is principally a single storey, flat-roofed, four-bedroom house with a partial basement taking advantage of the sloping nature of the site. The internal dimensions are approximately 300 square metres for the main floor and 100 square metres for the basement. While being contemporary and clean, the design of the house reflects its siting next to a classic walled kitchen garden. It has a glass roofed courtyard-style room at its centre, and a “virtual path” running right through the house along the line of the former garden path between the walled garden and the gardener’s cottage; it leads to a gate into the walled garden. It has a simple but elegant brick front, matching the old wall, with a discreet entry porch and a slim window opening to one side, while its most distinctive feature is a contemporary glass oriel window emerging through the wall. The rest of the house sitting behind the front wall is dark rendered with a large proportion of glazing.

The house will be designed and built on Passivhaus principles, utilising air-source heating, a mechanical ventilation and heat recovery system, solar power generation, electric and thermal energy storage, super-insulation, triple-glazing throughout and low energy lighting. Its layout and orientation is designed to maximise the benefits of natural solar heating. It is expected to be at least energy neutral overall, and very likely to be a net contributor to the grid.

Landscaping will incorporate newly planted trees to reflect its partially wooded surroundings and its past life as an orchard. At the front, the garden will be more formal, echoing the symmetry of the original kitchen gardens, and at the rear it will be less formal and will merge into the meadow-like landscape beyond. The wall will be under planted with an abundant herbaceous border including shrubs for winter interest and espaliered fruit trees, giving passers-by a glimpse of how the original Georgian walled garden would have utilised its high brick walls. The front boundary of the garden will be planted with a native hedge, which will hide the cars from the lane and partially hide the house itself.

There is a parking area for several cars at the front of the plot, immediately off the minor road.

The interior will also be highly contemporary and relatively minimalist using the highest quality natural materials such as wood and stone and with luxury specification kitchen and bathroom fittings.

View all posts by nigelindevon